We are proud to announce that our Head of STEM has been nominated as one of the “Social Responsibility / Community Award Finalists” for the Institute of Information Technology Professionals South Africa ’s (IITPSA) Annual President’s Awards 2019.

To support her please click “Support Rumbidzaishe” on the following link:

Rumbidzaishe Maisva is the Head of STEM (Science, Technology, Engineering and Mathematics) for Womandla Foundation where she forwards the agenda of encouraging young girls to pursue careers in STEM and related fields. She is a QA Automation Engineer at Global Kinetic, a FinTech (Financial Technology) company working with software development.

Rumbi is passionate about educating, equipping, motivating and inspiring people with knowledge about computer science. She has worked with a number of NGOs in IT including: Code For Cape Town, CodeSpace and Women in ICT as a motivational speaker, panelist and keynote speaker. She has also worked as a tutor for Mathematics and Science at the SOZO Foundation in Vrygound. As the Head of STEM for Womandla, Rumbi has been at the forefront of organising the inaugural Women in STEM Awards Ceremony powered by Nedbank Women’s Forum, Career Expo for Langa High School, Mentorship workshops and currently planning the Coding Workshop as a way to address the digital divide.

Her passion about education and information accessibility resonates within her Honours Project that focused on an automated system that was geared at answering STEMI (Science, Technology, Engineering, Mathematics and Innovation) questions for learners in underprivileged communities using of machine learning, symphonic and string matching algorithms. The automated system aims to address the digital divide by making use of raspberry pi devices to host information that can be accessed outside of an internet connection. The impact of rolling out this project would be education made easily accessible to learners through the use of Information Technology.

Her project work was published in a number of magazines including Engineering News <https://www.engineeringnews.co.za/print-version/nmmu-student-brings-knowledge-closer-to-learners-globally-2014-11-19>.  Rumbi has also been featured on eTV news “Shining a light on women in science” on the 13th of August 2019 where she spoke as an advocate of getting more women in science.

More about the Awards

The event highlights the talent and commitment of individuals within the ICT industry.

The following are the details for the categories for the IITPSA Annual President’s Awards 2019:

Watch our Director, Sam Gqomo, chat about the birth and vision of Womandla Foundation on SABC 3s ‘Afternoon Express.’

See how you or your organisation can get involved. We hope to roll out our events calendar with established partners for the year 2020.

Here’s to expansion! Send us any comments or queries on info@womandla.com.

Qualifications and background degree are less of a limitation for people wanting to get into coding. Coding is about problem solving and logical thinking and as such some people who studied other degrees who possess this skillset have started programming seamlessly and have gone and excelled in the IT environment.

Some IT companies have even started training potential candidates after completion of their high school who show potential to be computer programmers even though they do not hold a Computer Science degree.

The need for computer programmers in South Africa and the rest of the World has increased exponentially but there is still a big gap in knowledge of what coding is and how it affects the World.

We would like to present an opportunity to teach coding basics to young girls and women in Cape Town, South Africa. To do this Womandla is collaborating with NetCampus and below are the details of the workshop.

ABOUT THE CODING WORKSHOP

What do you need to bring?

You can bring a note book if you would like to take notes. Computers will be available at the venue.

We are looking to host 20-30 young women and girls who are passionate about learning about coding for the coding workshop and the form responses will be used for the selection of the attendees.

You can fill in the Coding Workshop Form if you are interested and the Womandla Team will contact you.

Should you otherwise be interested in adding to our facilitators please email info@womandla.com.

The details are still being finalized with a key dependent being confirming the level of knowledge of the young girls and women who want to attend the workshop to guide the session content.

Should you be interested or know someone who is please ask them to fill in the Coding Workshop Form for the workshop. 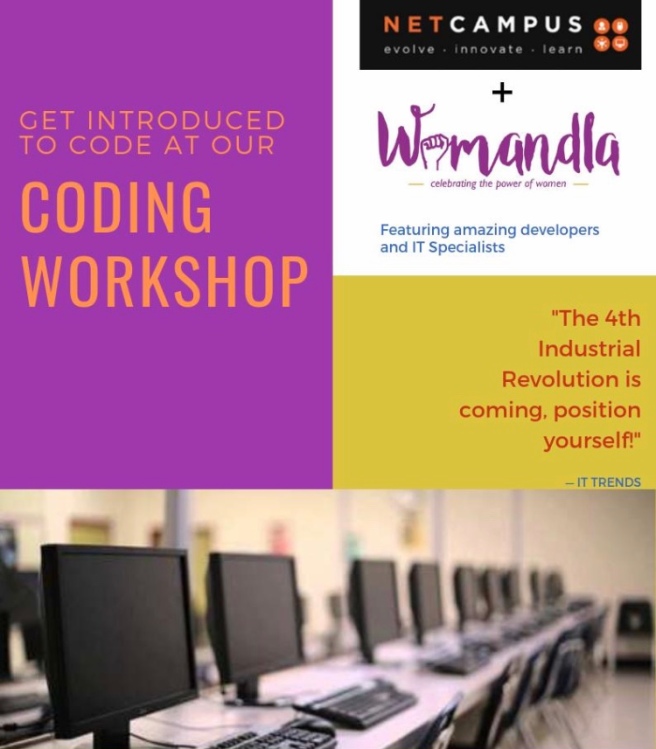 Like Loading...
September 3, 2019September 3, 2019 ~ Womandla ~ Leave a comment
With Women’s month just ended, this feels like it has been an attack against women and not the celebration of women. We all need to play our parts in bringing an end to this!

The World will not be destroyed by those who do evil, but by those who watch them without doing anything.
― Albert Einstein

Issued by The Department of Women, Youth & Persons with Disabilities
Attention Journalists and News Editors
Pretoria, 03 September 2019
THE WAR ON WOMEN CONTINUES
The Department of Women, Youth and Persons with Disabilities is alarmed by the continued killing of women especially in the month when South Africa celebrated Women’s Month. At its core, violence against women and girls is the manifestation of a profound lack of respect – a failure by men to recognize the inherent equality and dignity of women. It is an issue of fundamental human rights.
Just in the month of August more than 30 women were killed. This weekend the department issued a statement on the killing of SA female boxing champion Ms Leighandre “Baby Lee” Jegels, yesterday we were shocked by the killing of the innocent UCT student Ms Uyinene Mrwetyana who was raped and killed by a post office worker. Just this two cases of many cases reported demonstrates that every day women are being raped and murdered in South Africa.
The Minister in the Presidency for Women, Youth and Persons with Disabilities, Maite Nkoana-Mashabane continues to express her shock at the unabated wave of killings taking the lives of innocent women every day. There are intervention policies launched since the dawn of democracy and government is continuously looking at alternatives to end the violence against women and children, but that falls on deaf ears as men continue to rape and murder.
“Relationships should not result in death, they should be loving and supportive. There is an onslaught on women in this country, and gender-based violence continues with perpetrators believing they have the right to destroy the lives of others. We need stronger interventions if our women are to enjoy the fruits of our democracy the same way the majority of men do,” enough is enough added Minister Nkoana-Mashabane.
The department is calling upon the South African Police Service and the Justice System to work swiftly to remove perpetrators of gender-based violence from society, and to offer the right care and support to victims of GBV.
In mourning for all women killed, the department is declaring Sunday, 8 September 2019 a national moment of silence and prayer day and encourages all man to speak against gender violence.
ISSUED BY THE DEPARTMENT OF WOMEN, YOUTH AND PERSONS WITH DISABILITIES
For engagements with Minister Maite Nkoana-Mashabane please contact Ms Mmabatho Ramompi on 076 240 3513.
Media enquiries may be forwarded to Mr Shalen Gajadhar on 060 979 4235 or shalen.gajadhar@women.gov.za
Twitter: @DWYPD_ZA / #WhatWomenWant #WomensMonth2019
Instagram: @dwypdza
Facebook: @departmentwomen
Website: http://www.women.gov.za

Every nominee is a winner in our eyes, but one must take the title.

Listed below are the winners of each category:

Science was awarded to Zulaka Khan, the founder of the Verulam Dialysis Centre.

Mathematics was awarded to Professor Mamokgethi Phakeng, Vice-Chancellor of the University of Cape Town.

Advocacy for STEM in Community was awarded to Siphokazi Nciza, the Founder and Managing Director of Kasie Labs.

See you all next year!

We have an exciting line up with our Keynote speaker, Nonku Ntshona, talking about “Women’s leadership in STEM – Opportunities to increase representation and collective empowerment in Business.” 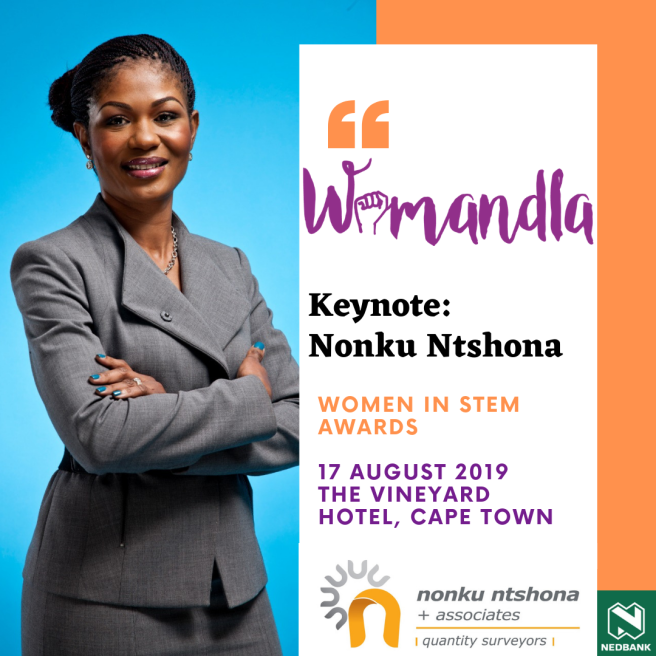 Send Proof of payment to info@womandla.com